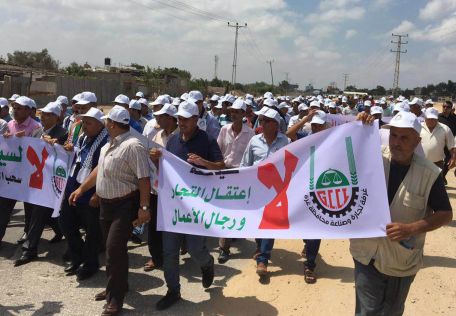 Traders at a demonstration at Erez Crossing, with a sign that reads: Stop the policy of detaining traders and businesspeople. Photo by Gisha

August 16, 2016. Dozens of traders from Gaza demonstrated on the Palestinian side of Erez Crossing in protest of Israel’s recent cancellation of permits to traders wishing to travel from Gaza on business.

Walid Al Husari, the head of the Gaza Chamber of Commerce and Industry, who organized the demonstration yesterday, told a press conference that since the start of the year, 1,500 trader permits had been revoked as well as 160 “Businessman Gaza” (BMG) permits. In addition, 200 companies have been blocked from ordering goods via Kerem Shalom Crossing, Gaza’s only commercial crossing. Al Husari called on the international community to influence Israel to reverse its harmful policies against businesses in Gaza.

In a conversation with Gisha’s field coordinator, Maher al-Tabaa, head of PR and media at the Chamber of Commerce and Industry, cited that Israeli officials speak often about “easing” the closure while in practice they are thwarting the activities of the private sector via restrictions on access that defy logic and aren’t properly explained. Israel is preventing businesspeople from traveling and stopping entrance of raw materials for industry. In doing so, it obstructs the very recovery and development it claims to support.

Gisha has noted a worrying uptick in people being denied travel under the sweeping pretext of “security reasons”. These are individuals who have been doing business with Israel and the West Bank for years, in several startling cases. They are not provided with any concrete allegations and thus have no recourse to defend themselves. The practice stands in total contravention of Israel’s self-stated interests and of course its obligations to residents of the Strip.