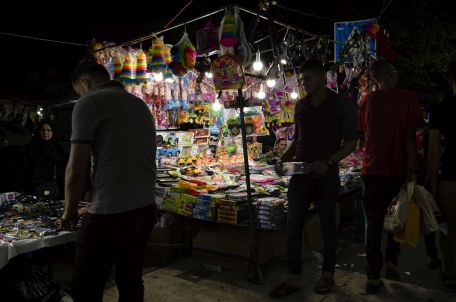 A lit up toy stand in Gaza. Photo by Gisha.

November 1, 2018. The supply of electricity available to Gaza residents has increased significantly as a result of the Qatari government’s donation of 60 million USD for fuel, which is being used to operate additional turbines at Gaza’s sole power plant. On October 24, a second of the four turbines at the plant was run; on October 28, for the first time since January 2017, a third turbine was also activated. The United Nations is purchasing the Qatari-funded fuel from Israel and coordinating its entrance into Gaza via Kerem Shalom Crossing. Along with the electricity bought from Israel and supplied on direct lines to the Strip, Gaza residents are now receiving power in cycles of eight (or more) hours of electricity, followed by about eight hours of blackouts, depending on the weather and other factors. The Qatari donation is expected to be sufficient to operate three of the plant’s turbines for six months.

According to Dr. Rafiq Maliha, director of the power plant, the three turbines are producing approximately 80 megawatts. According to the Gaza Electricity Distribution Company (GEDCo), the power plant is only supplying 75 megawatts to the electricity grid. The discrepancy is the result of loss of supply due to the poor state of the infrastructure and power transformers at the station. Though the fourth of the power plant’s turbines is currently undergoing maintenance work, Maliha doubts that it will be operated once it is repaired because of the distribution network’s limited capacity.

At present, the plant has a small fuel storage tank that can hold up to 300,000 liters of diesel. The turbines’ operating tanks can hold up to 700,000 liters. Together, the volume of diesel they have the capacity to hold is only sufficient for about two and a half days of operations. A larger tank with a capacity of up to 20 million liters, located near the plant, was shelled by Israel in 2014 and has not been repaired since.

According to Dr. Maliha, in order to ensure that the three turbines continue to operate at the current level of production, fuel should be allowed through the Kerem Shalom crossing on Fridays. Given that there is no tank at the plant that can store larger quantities of diesel, any day in which fuel does not enter the Strip via Kerem Shalom jeopardizes the steady supply of electricity currently available to residents. The diesel has to be stored near the plant for at least eight hours prior to its use so that the particles in the diesel can sink to the bottom of the tank, thus preventing damage to the turbines.