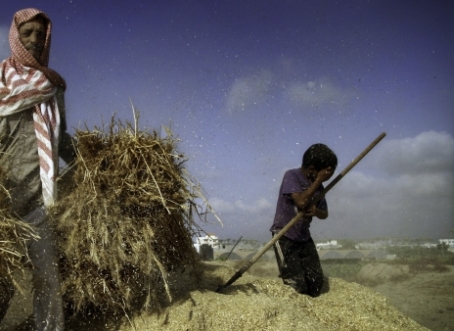 Farmers from Gaza share that the practice dates to a number of years ago. Photo: Eman Mohammed

January 7, 2016. Palestinian farmers report that Israeli airplanes sprayed herbicides over crops in areas next to the border fence between the Gaza Strip and Israel. Gaza farmland was sprayed last week as well, and the Palestinian Ministry of Agriculture cites that the spraying damaged 1,187 dunams (293 acres) of crops, much of it in areas far from the fence.

A senior official with the Palestinian Ministry of Agriculture told Gisha that the ministry has asked an international actor to convey to Israel its suggestion to bring in its own tractors to raze land and remove vegetation. The ministry hopes this arrangement would at least prevent spraying that harms more distant crops. The official said the ministry has not received a response.

Last week, the IDF Spokesperson admitted that the military was spraying herbicides in Gaza. The military responded that it had sprayed “herbicides and germination inhibitors” in order to “enable optimal and continuous security operations”. According to Gaza farmers, this practice has been going on for a number of years.

The decision to spray toxins over Palestinian crops raises a number of questions Gisha intends to send to the IDF Spokesperson in the next few days: