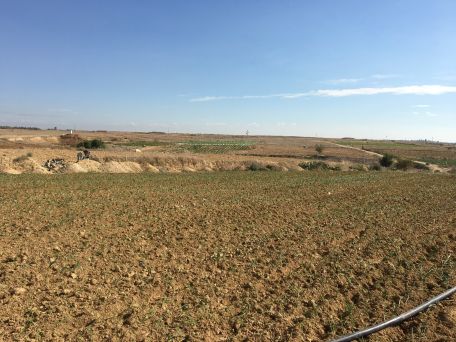 A field close to the fence in the Gaza Strip. Photo by Gisha

February 1, 2017. Early last week, Israeli planes sprayed herbicides near the Gaza perimeter fence, confirming what local Gaza farmers had been fearing for weeks. Several days later, a few hundred meters away from the fence, Gisha’s field coordinator met angry, frustrated farmers, who had lost the fruits of months of labor, and are facing financial ruin.

Wa’el Shami has seven dunams (around 1.7 acres) of spinach east of Khan Yunis. He had made a deal with a Gaza supplier who was interested in purchasing the crop. It would have brought in between 20,000 and 25,000 ILS (5,300-6,640 USD), but after the spraying, the crop is worthless, and the supplier, of course, backed out. Shami was left with bounced checks and debts, with fertilizers that need to be bought, and laborers who need to be paid to remove the damaged crops. All he can do now is wait two months for the crop to regrow, that is, if it proves that the crop wasn’t damaged at the roots. The spraying and the damage it causes have been happening for three years, Shami says.

Local farmers grow spinach, peas and wheat at a distance of 250 to 1000 meters away from the fence. All of them report damaged crops, with more severe damage in the areas closer to the fence.

Farmers pointed to an area between the fence and Shami’s fields and said military tractors come in from time to time and level the land to eliminate any dense vegetation, allegedly to preserve a clear sight line into the Strip. The spinach in their fields grows no higher than 20 centimeters, which leaves farmers wondering what purpose the spraying serves. What does Israel have to gain from this repeated act? Some are convinced that the purpose is to make them abandon their fields altogether. The media, even the local media, no longer shows interest in their plight, and the farmers feel disregarded.

One farmer spoke of his plan to sell four sheep and the rest of his wife’s dowry gold to repay his debts to the owner of a well he uses to water his fields, and to his fertilizer supplier. The crop he had grown was going to cover these debts. Now it won’t.

Wa’el Thabet, director of the Flora Protection Department in the Palestinian Ministry of Agriculture says spraying conducted over the month of January has damaged approximately 3,400 dunams (roughly 840 acres) of produce. The damage to fields in the central, Gaza and northern districts (1,400 dunams) (roughly 346 acres) was light to moderate, and the damage in the Khan Yunis and Rafah districts (2,000 dunams) (roughly 494 acres) ranged from moderate and severe to complete destruction, meaning the fields will yield no more crops this season.

“The extent of the damage depends on the distance from the border and the type of crop”, Thabet explains. “Spinach, parsley and the like, mostly grown in the south, are more susceptible to the spraying compared to crops such as eggplant, zucchini and cauliflower. Also, in the south, the fields are closer to the fence”.

Responding to a Freedom of Information petition filed by Gisha, the Ministry of Defense said in September, that the spraying takes place only on the Israeli side of the fence, in the security barrier area. Given the extent of the damage deep inside the Strip, this reply is far from satisfactory.  The ministry failed to explain why the spraying was carried out, and why the same result could not be achieved using less destructive methods.