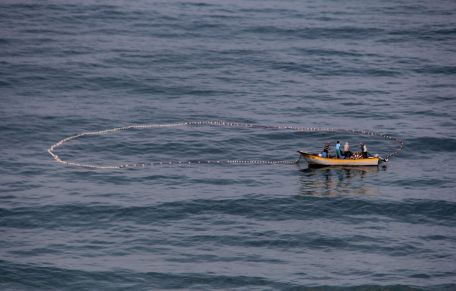 Fishermen in Gaza. Photo by Gisha.

November 14, 2018. For the past three days, Hamas security forces in Gaza have blocked movement through Erez Crossing, other than for medical patients and exceptional cases. A demonstration on the Israeli side of Kerem Shalom disrupted the movement of goods through the crossing, which operated as normal throughout the week.

Kerem Shalom Crossing is open, but demonstrations held by local Israeli residents on the Israeli side of the crossing since yesterday have delayed the movement of goods into and out of the crossing. The demonstrators are protesting the ceasefire agreement.

At Erez Crossing, other than medical patients, 32 residents of the Strip were able to exit and travel by shuttle to visa interviews at the American Embassy in Jerusalem. Foreigners have also been allowed to exit Gaza via Erez. The weekly shuttle to Allenby Bridge Crossing, for residents traveling abroad, was cancelled yesterday following restrictions imposed at the crossing by Hamas.

Since Monday evening, Israel has restricted access to sea for fishing. According to the head of the fishermen’s union, Zakaria Bakr, yesterday Israel notified the Palestinian Ministry of Agriculture in Gaza that sailing out to sea was forbidden entirely. Today (Wednesday), Israel notified that the restriction would be partially lifted: Sea access from northern Gaza to the fisherman’s wharf in Gaza City would not be permitted at all, from Gaza City to Wadi Gaza fishing would be permitted up to six nautical miles and from Wadi Gaza south, nine nautical miles.

During the day, it was reported that a fisherman, aged 23, was shot to death. According to Bakr, the fisherman was just 30 meters (100 feet) into the sea in northern Gaza, and was targeted by Israeli forces positioned on land.