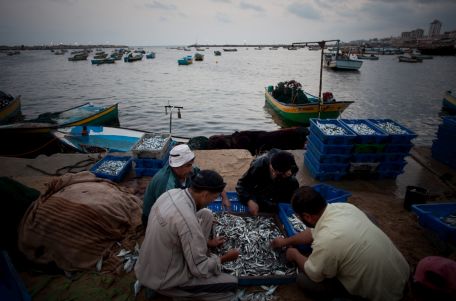 According to the fishermen, the short period of expansion didn’t improve the overall dire condition of the fishing industry. Photo by Eman Mohammed

June 30, 2016. After more than two months during which Israel allowed Gaza’s fishing sector to reach as far as nine nautical miles from the Strip’s southern coast, the state announced that it is once again reducing the zone to six miles. A spokesperson for the Coordinator of Government Activities in the Territories was been quoted by Palestinian news agency Ma’an saying that the extension was temporary and meant to last only during the spring’s main fishing season (April to June). Gaza’s fishing industry is active year-round. In the absence of a specific security rational, it’s hard to rationalize what appears to be an arbitrary restriction on an area meant to support the livelihoods of some 4,000 people and their families.

Fishermen in Gaza shared with us that that the short period of expansion didn’t improve the overall dire condition of the fishing industry. However, they report wider variety of catches, such as Jaffa cod fish that have been absent from fresh fish markets for eight years and were now sold for 50 shekels per kilo. Fishermen who managed to catch Jaffa cods in some cases quadrupled their daily income. At the same time, the number of arrests and confiscations of fishing boats and equipment by the Israeli navy also increased during this period, according to the fishermen’s association of Gaza. They claim that 75 fishermen were held for questioning and 20 boats were seized and have not yet been returned.

Rafah Crossing between Gaza and Egypt opened Wednesday for crossing in both directions and is expected to stay open through Monday (it will be closed on Friday). On the first day, it was reported that 999 crossed in both directions, 572 exited Gaza and 427 entered from Egypt.

From the beginning of this year until yesterday, Rafah was opened for just nine days, with a total of 9,556 people passing, of which 6320 exited the Strip. To understand the magnitude of the unmet needs, suffice to mention that during the first half of 2013, when the crossing was open regularly with few restrictions, 40,000 people passed each month in both directions.