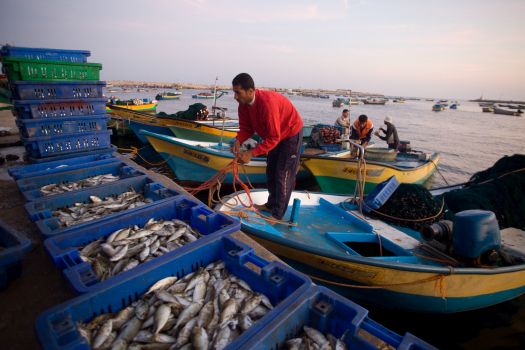 In early April, Israel expanded Gaza’s permitted fishing zone by an extra three nautical miles in some areas. The very day it became possible, dozens of boats sailed out to explore waters that had just been off-limits and brought in catches that hadn’t been seen in the Strip for some time. Never mind that the extension was just temporary and that fishing access remains exceedingly limited; there’s yet another factor crippling Gaza’s fishing sector. Ever since the closure was imposed on Gaza in 2007, Israel has prevented raw materials needed for building and repairing fishing boats from entering the Strip. These materials are included in Israel’s list of “dual-use” items, that is, civilian commodities that Israel fears may be used for military purposes. This, together with the restrictions on the area in which Gaza’s fishermen and women may sail and fish, have severely harmed the historic sector, pushing many into poverty and unemployment.

Some of the materials Israel restricts for entry into Gaza are fiberglass, sealing agents, paint and paint thinners, as well as the fabric used to cover boats before painting (not to mention, boats themselves). Israel considers most boat engines and devices for locating high fish concentration during the day and night as “dual-use” items too.

Israel also severely limits the entry of wood planks thicker than 1 centimeter and which are needed to build boats. Gisha published an information sheet about the lack of clarity and inconsistency surrounding the management of the list of materials (which items are fully banned, how decisions are made about what to let in, timeframes, etc.) and the impact of the restrictions on entrance of goods.

Attacks on fishing vessels by Israel’s navy, which, beyond having led to multiple deaths and injuries, also cause damage to boats and thus augments the need for parts and materials for repairs. Small fishing vessels are also often damaged when they hit rocks or other boats due to fog. Constant maintenance and repair are therefore routine. Many in the sector, as well as their families, have lost their source of livelihood after their boats were damaged.

According to sources in Gaza’s fishing industry, there are currently only 2,000. Many have been pushed into poverty. In mid-2013, the United Nations estimated that 95% of Gaza’s fishermen and women and their families rely on humanitarian aid to survive.

The challenge of bringing in basic raw materials for constructing or repairing boats has resulted in the withdrawal of projects for supporting the fishing sector run by international organizations. Last year, according to sources involved, a UN agency asked Israel for permission to bring in materials needed to construct new boats, stating it would supervise the materials to ensure they are only used for this purpose. The initial response given by the Israeli authorities was positive, but later the ok turned into a refusal, apparently on the recommendation of the Israeli Security Agency.

Restrictions on the entrance of raw materials needed for industry harm a variety of sectors in Gaza and impact civilians across the board. The restrictions on wood planks more than a centimeter thick, for instance, have crushed the furniture industry – a sector that managed to survive the closure at its harshest by making deep cuts and selling to the local market. In another example, the difficulty of bringing water pumps into Gaza has impacted the ability of aid agencies to help improve Gaza’s water and sewage infrastructure.

There is an international standard for dual-use items, the Wassenaar Arrangement, but Israel’s list is much more extensive and a sizeable part of it is specific to Gaza. It includes items whose use is overwhelmingly civilian and critical for civilian life. All too often, Israel’s conduct with regard to the list demonstrates that in the calculation of security gained by the restrictions versus the impact on civilians in Gaza –  in this case, on Gaza’s fishing industry – Gaza residents hardly figure, if at all.