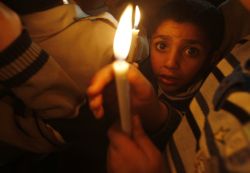 In the meantime, the supply of reserve fuel is running out. About 72% of the fuel supplies of all hospitals in Gaza have already run out and the minister of health in the Strip has warned that hospital generators were expected to stop working today. If this occurs, more than 400 kidney patients in the Gaza Strip will be in danger as their dialysis machines require a steady supply of electricity for many hours at a time.

Oxfam warns that if the fuel supply is not renewed, there is a high risk that the streets will be flooded with sewage, which may cost lives. On February 11, ten-year-old Ahmad al-Zein drowned in a sewage treatment pool in Beit Lahia and in December two brothers aged two and five drowned in a sewage treatment pool near Khan Yunis. Oxfam also warns that the water supply to households in the Gaza Strip may be reduced by 50%.