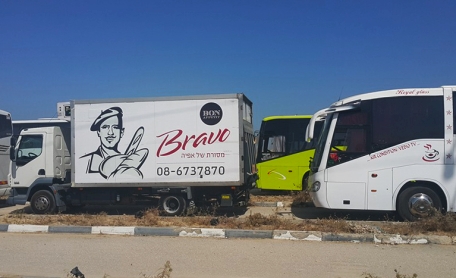 July 21, 2016. For the first time since 2007, the pedestrian crossing at Erez used for transfer of vehicles. In parallel, COGAT announces a freeze on mail services to the Strip.

Three trucks, eight buses and 54 cars bought in Israel entered Gaza through Erez Crossing last week. According to Palestinian sources, the Coordinator of Government Activities in the Territories (COGAT) announced the week prior that the entry of vehicles through Erez Crossing, rather than Kerem Shalom Crossing, would be permitted. The vehicles are destined for the private sector in Gaza and their entry was supervised by the Palestinian Transportation Ministry.

Palestinian officials expressed hope that the move was an early sign of an upcoming change in policy, opening Erez Crossing for the transfer of goods in addition to its use as a pedestrian crossing. Gisha learned that Israeli Ministry of Defense officials were set to visit the crossing, apparently to determine next steps needed to open a commercial crossing in the north of the Gaza Strip.

Currently, the entry and exit of goods into and out of Gaza takes place only through Kerem Shalom Crossing. Erez Crossing, meanwhile, is mainly used as a pedestrian crossing, for transfer of mail, and on some limited occasions has served as an entry point for humanitarian donations. The exclusive use of Kerem Shalom as Gaza’s only commercial crossing is problematic for a number of reasons, including because of the relatively long distance to Ashdod port and to the West Bank, and because of heavy traffic on the only road leading to the crossing.

In parallel to the good news, COGAT announced last week that it would be halting public postal services to and from Gaza. The announcement, published on COGAT’s Arabic Facebook page, claimed that “many, repeated, attempts to smuggle materials used for terror purposes [through the postal services]” have been identified. The photos featured in COGAT’s announcement showed a knife, a lighter, springs, Wi-fi antenna, consumer camera drones and other primarily everyday items. Until further notice, residents of Gaza will be compelled to rely on private delivery services provided by private companies, of course at a much higher cost.

The irony is that packages exiting and entering the Strip will still have to undergo the same screening that public post would. The ban on public postal services then raises questions regarding the nature of the decision, which appears to be purely punitive rather than a security necessity. This decision will mainly affect economically disadvantaged residents of the Strip. Doing so, it also flies in the face of repeated statements by Israeli officials about the need for rehabilitation and recovery in Gaza, while removing unnecessary obstacles.