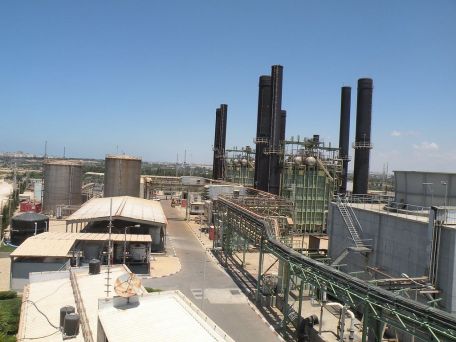 July 9, 2017. The electricity crisis in the Gaza Strip has reached a dangerous all-time-low: On top of reductions to the volume of electricity sold and provided to Gaza by Israel, the supply lines from Egypt are out of commission following violent clashes in the Rafah area. Entrance of fuel from Egypt, intended for Gaza’s power plant, has stopped.

The electricity supply lines from Egypt have been out of commission since Friday, following an attack on the Egyptian side of Rafah, with no known timeframe for their repair. Gaza’s Energy Authority announced that the Palestinian Authority (PA) has blocked payments to Egypt for the fuel purchased for Gaza’s power plant. As a result, since last night the power plant has only been able to operate a single turbine, as opposed to the three which had been operating since last week. In addition to the reduced electricity supply from Israel, the total volume of electricity available to the Strip is currently as low as 90 megawatts, about one-fifth of demand and less than half of what was available to residents prior to the beginning of the current crisis in April. Residents of the Strip have reported power-cuts that go on as long as 19 hours, with very few hours of supply each day.

Gaza’s Energy Authority stated that alternative methods of transferring payment for the purchase of fuel are being explored. Employees of the power plant told Gisha that the fuel currently stored at the plant is enough to operate one turbine until this evening at 8 p.m. They hope that additional supplies will arrive from Egypt during the day. Since Friday night, the power plant had only been producing between 20 and 23 megawatts.

On June 19, Israel began reducing the volume of electricity sold and provided to Gaza, in response to the PA’s request. At first, Israel announced that the supply would be reduced by 40 megawatts to 80 megawatts. According to reports received by Gisha from the Gaza Electricity and Distribution Company and the Energy Authority in Gaza, the actual amount of electricity provided by Israel does not exceed 70 megawatts.

The acute insufficiency of electricity in Gaza cannot be allowed to continue. It puts the lives of residents at great risk, causes severe damage to the Strip’s infrastructure, and puts the stability of the region as a whole at jeopardy. The electricity crisis in Gaza is the product of policy, not natural disaster. Israel, the PA, the government in Gaza, Egypt, and the international community must cooperate in finding a solution. The lives of residents must be protected, regardless of political disputes.