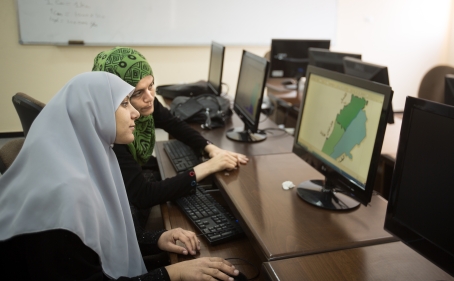 February 11, 2015. Despite promises to ease access for Gaza residents, the Israeli Defense Ministry is ignoring requests for students from Gaza to access graduate studies in the United States, Australia and other countries.  Gisha-Legal Center for Freedom of Movement appealed last week to the Defense Ministry asking for the immediate departure of eight of these students, but no answer has been received, and the students risk losing their places abroad.

Most of the students received scholarships from the universities to which they were accepted, including in the United States and Australia. Citing the importance of economic and educational development for regional stability, Israeli security officials have said they will allow students like these to travel abroad via Erez Crossing and Allenby Bridge in the West Bank.

Gisha has tried for the past two months to obtain permission for these students to travel, but representatives of the Coordinator of Government Activities in the Territories (COGAT) have not answered repeated requests.

Travel to and from Gaza has actually become more restrictive since the end of the fighting this summer. While Israel has doubled the number of Palestinians permitted to travel via Erez, Egypt has kept Rafah Crossing mostly closed, allowing exit from Gaza lately for only three days each month. Israel does not allow travel via Gaza’s airspace or territorial waters or via Israeli airports. Many Palestinians, including students, have been “stuck” in Gaza since Operation Protective Edge, unable to return to their studies, their work or their families. Israel’s travel criteria allow scholarship holders, like most of the eight students in question, to travel abroad to Western countries, but hundreds of other students are not even eligible for travel via Erez.

Gisha Attorney Talia Ramati wrote to COGAT head Gen. Yoav Mordechai on Thursday on the students’ behalf, reminding him of Israel’s commitment to improve access: “Allowing students to reach graduate study abroad is not only in the interest of the Palestinian population in Gaza, including experts in various fields who can engage in rebuilding the ruins left by the hostilities, but also in Israel’s interest, in order to prevent a humanitarian crisis and to promote the economic strengthening of the Gaza Strip.”

Majdi Ismail, a student from Gaza, told “Haaretz” that he is worried that his permit to study medicine in Tunis will expire and that his scholarship will be revoked if he is unable to leave Gaza by the end of the month. While he was awarded the scholarship immediately after he graduated from high-school in 2013, he has been unable to leave Gaza since. “I am like any other student in the world. I am not asking for something unreasonable or imaginary. I want to study and then come back to my country, to serve my people. These next few days and nights could determine my entire future, if I don’t leave soon.”

In response to “Haaretz” COGAT stated that “due to the closure of the Rafah Crossing, the Coordinator of Government Activities in the Territories is favorably examining the students’ requests to leave Gaza to pursue higher education abroad. Additional requests to leave for educational purposes are also currently being examined.”