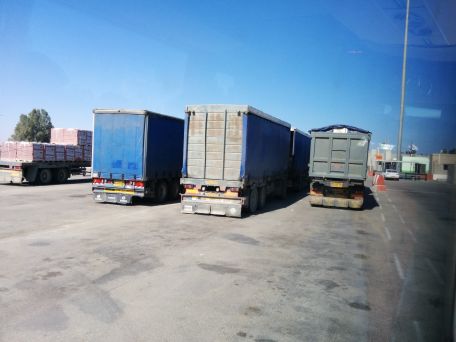 July 12, 2018. On Monday, in a sweeping measure of collective punishment that calls to mind the days of outright economic warfare on Gaza’s civilian population, Israel announced that it will place severe restrictions on the entry of goods through Kerem Shalom, Gaza’s main crossing for movement of goods in and out of the Strip. The exit of goods from Gaza destined for the West Bank, Israel or abroad has been banned altogether.

Under the renewed restrictions on movement of goods, only items Israel deems “humanitarian” will be allowed to enter Gaza; mainly fuel, food, some medical equipment and medicine, livestock, and animal feed. All other goods are now forbidden from entering, including items such as construction materials, clothing, blankets, mattresses, water pumps, spare parts, generators and more.

Israel’s distinction between “humanitarian” and thus permitted items, as opposed to “less essential,” and therefore banned items, is as baseless as it is egregious; particularly given the devastating humanitarian situation already rampant in Strip. It appears Israel is once again attempting to limit supplies to Gaza to a humanitarian minimum, as it did during the harshest periods of the closure.

1. Israel provided the Palestinian Crossing Authority with a list of goods still allowed to enter Gaza. All other items are apparently forbidden, as are outgoing shipments of goods destined for sale in the West Bank, Israel, or abroad.

2. A look at the volume of incoming goods via Kerem Shalom in the past month illuminates the far-reaching impact Israel’s new sanctions could have on future supplies to Gaza. Out of the 6,819 truckloads of goods that entered Gaza via Kerem Shalom during June 2018, only 45% (3,048 truckloads) would be allowed to enter under the new restrictions. In other words, more than half of the goods that entered in June, goods needed for normal life, will be banned from entering.

3. Construction materials accounted for 44% of the goods that entered Gaza through Kerem Shalom in June that will now be forbidden from entering the Strip. This will quickly halt construction work, as seen in the months leading up to Operation Protective Edge in 2014 when Israel also banned construction materials from entering. Unemployment in Gaza, which is nearly 50%, will also be dramatically impacted. Gaza has a chronic shortage of housing units, classrooms and medical facilities.

4. In June, 149 trucks carrying goods destined for sale in Israel, the West Bank and abroad left the Gaza Strip. This is a fraction of the volume of goods shipped out of Gaza before the closure was fully imposed in June 2007, when over a thousand trucks left the Strip every month.

5. Farid Zaqout, Chairman of the Building Industry Association in Gaza, told Gisha’s field coordinator that Monday’s announcement resulted in an immediate spike in the cost of construction materials, particularly cement. Until Monday, a ton of cement was sold for 490 ILS (135 USD). Today, the price ranges from 660 to 800 ILS (180-220 USD). Zaqout also pointed out that a slowdown or halt of the construction sector will also impact furniture, aluminum, and other sectors dependent on construction.

6. Hasan Shehadeh, who owns a clothing company, says the decision kept him awake at night: “I work with several companies in the West Bank, Israel and China. My phone has been ringing off the hook since yesterday. The suppliers are panicking over potentially not receiving the goods. If things stay this way, I’ll suffer huge financial losses, because in my contracts I’ve signed a commitment to pay for every item left in my factory. I have a hundred people working in the factory and a hundred more working from home. Israel’s decision will affect them too, of course.”

7. Suliman Z’urub, a farmer, was ready to ship 2,000 crates of sweet potatoes. He says the produce cannot be sold in Gaza due to low demand and will go to waste. “Farmers are the big losers from this decision,” he says. “They’ve invested a great deal in growing the crops and have been waiting to sell them to pay back debts and loans and make a little money. Now they have nothing.”

8. Storing produce in cold rooms in Gaza is inherently difficult given the electricity crisis, and produce prices keep dropping. The price of a crate of tomatoes plunged from 80 to 60 ILS overnight (22 to 16 USD). Ahmad al-Astal, a produce supplier, says: “The problem is that even if the prices drop even further, the local market can take no more than 30% of the goods slated for sale outside Gaza.”

Israel’s choice to use collective punishment to address the challenge posed by burning kites is immoral and illegal. As it is, humanitarian conditions in Gaza are deplorable, even dangerous. The harm inflicted on farmers in the south of Israel is both serious and lamentable, but harming Gaza’s residents is not going to fix it.