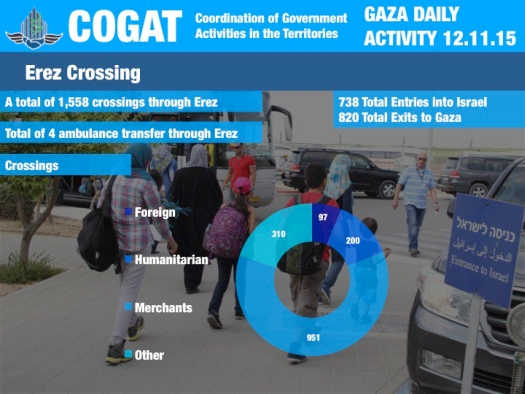 The figures also fail to mention what comes under the “other” rubric, or what constitutes “humanitarian”. The photo is taken from COGAT’s Twitter page

On November 15, 2015, this picture was posted to the Twitter and Facebook accounts of the Coordinator of Government Activities in the Territories (COGAT). Nothing unusual. COGAT posts similar pictures to its social media accounts on a near daily basis: simple infographics with figures on the number of people crossing Erez, or the number of tons of goods entering Gaza, and also (albeit incorrect) figures on the amount of water and electricity Israel sells Gaza.

Most Israelis, let alone foreigners, don’t really know what COGAT is, even though it is a significant unit within Israel’s Ministry of Defense headed by a decorated major general. The unit coordinates and implements the government’s “civilian policy” (as opposed to military policy) towards Palestinians in the Gaza Strip and the West Bank; millions of people rely on it for building permits, merchant permits or permits to travel or move goods.

COGAT is ostensibly charged with managing central aspects of civilian life in the Palestinian territory, overseeing the welfare of the population and advancing development. This makes the information it publishes immensely important, especially for Palestinians who are meant to be the main beneficiaries of COGAT’s activities. COGAT determines who can travel to and from the Palestinian territory and under what circumstances, who can obtain a merchant permit or a commercial trading permit, what Gaza made and produced goods can be sold outside Gaza, and much, much more.

What do COGAT’s numbers mean anyway?

Not much. First, the infographic doesn’t mention the important difference between the number of “crossings” and the number of “people crossing”. This isn’t just semantics. Travel permits are often issued on condition that the holder returns on the same day, and so a person who leaves Gaza and then returns is counted twice. The figures also fail to mention what comes under the “other” rubric, or what constitutes “humanitarian”, for that matter. It’s impossible to know exactly how many people crossed, for what purpose or what categories of people crossed. It’s difficult to get this information even by directly contacting COGAT, which only just answered (Hebrew) an official letter (Hebrew) on the subject we sent in June.

More importantly – COGAT’s figures lack context. Are 1,558 crossings a lot or a little? Is it a dramatic increase or a slight decrease compared to last month? How about compared to last year or 15 years ago? On its own, the number 1,558 is meaningless. When COGAT describes the volume of commercial goods transported through Kerem Shalom it speaks of thousands of truckloads, hundreds of tons of gas or hundreds of thousands of litres of fuel. Is this a lot or a little for a population of 1.8 million? Does it reflect real economic activity?

COGAT’s Twitter and Facebook accounts don’t really seek to provide the public with information. They use tidbits of information, handpicked, neatly organized and published in English only – for the purpose of public relations. And so, 1,588 sounds like an impressive number – so long as there is nothing to compare it to. In this case, for instance, it might be worth remembering that in 2000, before severe travel restrictions were imposed on the Gaza Strip, 500,000 exits by laborers were recorded at Erez Crossing every month – that’s more than 20,000 people a day (or 40,000 if you want to count their entrances and exits).

Why is the information posted on social media and not on COGAT’s website?

Well, COGAT’s website has not been updated for more than five months due to “technical difficulties”. No new reports, updates or notices of changes to protocols or policy – which COGAT is legally obligated to make available to the public – have been posted to the site. COGAT’s website is meant to serve as a critical source of information, both for Palestinians and for Israelis who are interested in understanding Israel’s policies. COGAT updates and changes the quotas for entrance of laborers from the West Bank, for example, every few weeks, as it does regularly with respect to the criteria and quotas for who may travel in order to work, study, obtain medical treatment, visit family or visit holy places. For months now, this information, which is relevant and belongs to the public at large, has been provided to Gisha only, by fax, and this too only in response to demands by the organization.

We waited to publish this until now because we understand that technical difficulties do happen and that sometimes it takes time and effort to solve them. Yet at the same time, we don’t quite understand why social media couldn’t have been used to publish information not just in English, or why the information couldn’t be posted on other official websites, like the IDF Spokesperson’s site or the Ministry of Defense (not to mention the slight effort it would take an average person with a bit of motivation to open a simple website where the information can be hosted temporarily). The longer COGAT’s website remains out of commission, the more flagrant the gap between its duty to provide the public with timely, organized information and the dereliction of that duty with the choice to post this particular kind of information on social media. Accordingly, we hereby offer to set up a temporary website for COGAT on wordpress.com – this is a popular free service, which we are confident could step in for the official website, at least until the old one is back up and running. Five months later, it’s about time.