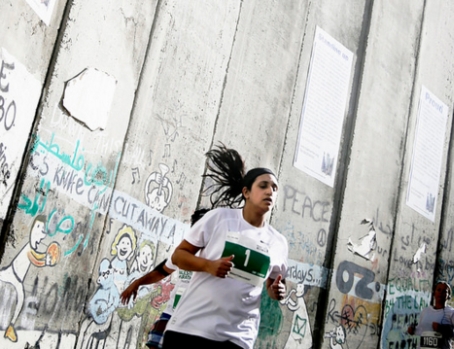 Gaza residents once again pay the price for negligence by the authorities. Palestine Marathon, Bethlehem, 2015. Photo by: Signe Vest

March 31, 2016. Tomorrow (Friday, April 1) the fourth annual Palestine marathon will take place in the city of Bethlehem in the West Bank. More than 100 residents of Gaza requested to exit Gaza to participate in the marathon. The Palestine Athletic Federation in Gaza and the Palestinian Olympic Committee, based in Ramallah put together a list of runners. However, the requests were not processed by the Coordinator of Government Affairs in the Territories (COGAT) because, according to them, the list was submitted “after the expected deadline”.

Yesterday, COGAT published on its Facebook page in both Arabic and English that the list of names was submitted too late for them to process it, and that because of this no one would be permitted to exit.

The Oslo process led to the creation of parallel coordination bodies, the Palestinian Civil Affairs Committee (under the authority of the Ramallah-based Ministry of Civilian Affairs) and the Israeli Coordination and Liaison Administration (under the authority of COGAT and thus the Israeli Ministry of Defense). Individuals in Gaza rely on the PCAC to pass their permit requests for travel from Gaza to their Israeli counterparts at Erez CLA. In between the two bodies lies what seems often like a black hole, with one side claiming the request was sent and the other side claiming it never arrived. In the case of the marathon, a grouped list was sent by the PCAC directly to COGAT.

It is disappointing, though not surprising, to learn yet again that Gaza residents are paying the price for the apparent negligence and disregard by the authorities – Palestinian and Israeli – who are responsible for processing permit requests. The runners deserve an account of what happened. That said, it is just as important to review the mechanism by which permit requests are submitted, as it’s clear that the mechanism is broken and in need of fixing.

Even if the requests came later than expected, COGAT could have reviewed them, at the very least for those participants who have received permits in the past and are well-known to officials, like Olympian runner and last year’s marathon winner, Nader al Masri. This would have been a demonstration of good faith and good sportsmanship. Instead COGAT chose to reject all the participants in a sweeping and seemingly punitive gesture.