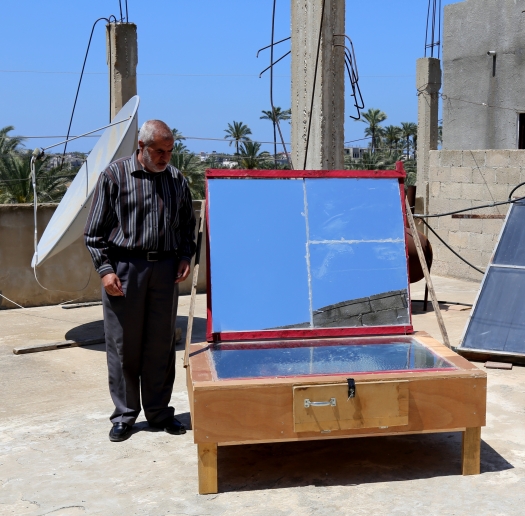 Here’s a story about ingenuity and creativity. If you wish, you can see it as a testament to how the human spirit prevails even under the toughest conditions.  If you’re willing, you can see it as an opportunity, a mutual interest, or a proposition for using a renewable regional source of energy for the greater good.

Khaled Bashir, 50, lives in Deir al Balah in the Gaza Strip. Like all Gaza residents, he too has to contend with rationed electricity supply. Now, on a “good” day, electricity is on for eight hours and off for another eight. Like all Gaza residents, he lives with the constant rattle of generators and the never-ending shortage of fuel. He too is well acquainted with the long lines with which one has to contend to buy a tank of cooking gas. Bashir endures all of this, but a little less than others. He has an oven that requires no electricity and no gas.

In 2000, long before Gaza’s power plant was bombed and years before the closure, Bashir built his first solar oven. “My initial objective was clean energy”, he told Gisha. “This oven is better than an electric or gas oven. It uses natural energy that doesn’t cost anything and is available in Gaza year-round. Solar cooking helps keep the flavor and quality of the food, and it never burns, because the sun is in constant motion”.

The oven heats up to 140 degrees centigrade, making cooking slow. “You can make everything in this oven, except tea and coffee”, says Bashir. The oven managed to end his dependency on cooking gas tanks almost completely. “I fill a tank only once a year. It was only this past year that I realized now is the time to tell people that there is an alternative to gas, electricity and fuel. Instead of waiting in long lines for a tank of cooking gas, they can rely on a source that’s available to everyone”. So far, Bashir has overseen the building of about 20 solar ovens, mostly for his neighbors. He says the response has been very positive.

Khaled Bashir completed a B.Sc in chemistry in Algeria in 1985 and an M.Sc at the University of Pretoria in South Africa. He also completed a correspondence degree program through McGill University in Canada. He is an expert on sustainable energy using renewable resources, such as solar energy. He worked for the Palestinian Agriculture Ministry for many years. He now works for a company that manufactures construction materials, where he is oversees the materials used for insulating concrete. He makes his solar ovens with a relative.

“I’m not doing this for profit”, he says. To build an oven, all one has to do is come to him, or call him to come and oversee the process. It takes about two days to build the oven and costs about 700 shekels. The cost can be mitigated if recycled wood from unwanted furniture and glass from old mirrors are used.

“I want to see the young people of Gaza turn to alternative energy”, Bashir says. “My house is open, and I’m willing to share my knowledge”.