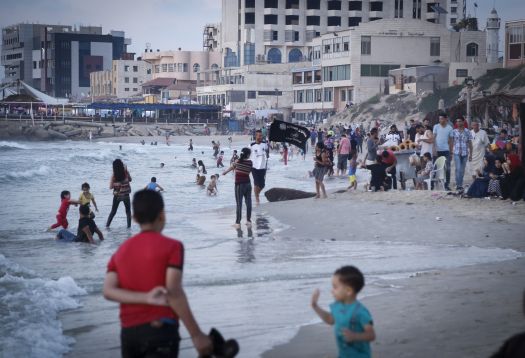 Beach in Gaza. Photo by Gisha

The ongoing electricity crisis in Gaza is impacting the coast, and not just in Gaza. Now, the fear is that what small efforts were made in recent years to make improvements to Gaza’s crumbling infrastructure may come to naught.

“I feel a huge disappointment when I see sewage flowing through Wadi Gaza and into the sea without any treatment,” Nahed al-Khatib, an engineer responsible for running the sewage facility treatment in Wadi Gaza, told Gisha’s field coordinator. “We worked around the clock to get this project up and running. We expected to be able to treat sewage and prevent it from seeping into the groundwater and the sea to avoid contamination. Now, everything is lost.” The first phases of the sewage treatment process, particularly the oxidation phase, require the use of large fans. This requires electricity, and without it, the sewage only undergoes minimal screening before it is pumped into the sea.

The Gaza Environmental Authority told Gisha’s field coordinator that tests were conducted in beaches during April and May. Fifty percent of the beaches were found to be contaminated, and were closed to the public. Though no tests were conducted in June, because of Ramadan, the Authority’s executive director estimates that more beaches will have to be closed (maybe as many as 70 percent) due to deteriorating conditions.

Water quality is determined by samples collected at 48 locations along Gaza’s coastline and tested in labs in accordance with standards set by the World Health Organization. The pollution of seawater in Gaza did not begin with the current crisis. One of the consequences of the chronic electricity shortage and the dilapidated infrastructure is the constant pumping of insufficiently treated wastewater into the sea. The current crisis, has, however, exacerbated the problem immeasurably. The Gaza Municipality, for instance, uses the little power available to run pumps that dispose of sewage from crowded neighborhoods, rather than operating treatment facilities. At least 110,000 CM of untreated or partially treated sewage is pumped into the sea every day.

The pollution is worse along Gaza’s southern beaches. In the north, Israel prevents the pumping of sewage directly into the sea; it is run through treatment tanks, and partly deposited into the soil. This solution is problematic as well, as it causes contamination of the ground, which seeps into areas in Israel, as well. As if this wasn’t enough, Khatib says he is also troubled by the restrictions Israel imposes on the entry of generators and their spare parts. The shortage of generators is threatening municipalities’ ability to remove sewage from homes and neighborhoods, which depends on electric pumps. What would happen, he wonders, if one of the generators operating the pumps fails?

Bathing in polluted seawater may not be fatal, but it does pose a serious health hazard, especially among children. Some of the diagnoses that have been made in Gaza include skin infections, respiratory system infections, eye and ear infections, diarrhea and severe abdominal pain.

Without any other option for cooling off on these hot summer days, the sea is the only escape, and for many in Gaza, a place to spend leisure time. Children, who comprise most of Gaza’s population (42 percent are below the age of 15), are those most affected.

As of last week, the effects of sewage pollution have been felt in Israel as well. Its most southern beaches have been closed to the public (Hebrew) on orders of the Ministry of Health. Pollution and disease know no borders and do not succumb to closures. The continued deterioration of Gaza’s infrastructure, for which Israel shares responsibility with the Palestinian Authority, the Hamas de-facto government in Gaza, Egypt and the international community, ultimately affects Israeli citizens as well. Following over a decade of closure, the reckless game that has been played for the past three months, using Gaza residents as pawns, puts the entire region at risk. A sustainable solution, allowing the residents of the region as a whole to lead normal, safe lives, must be reached.