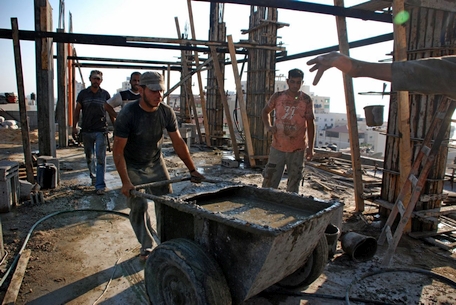 Israel has banned the entry of cement for Gaza’s private sector for more than six weeks. Photo: Karl Schembri

May 18, 2016. Late last week (May 11-12), Egypt opened Rafah Crossing, connecting Egypt and Gaza to limited pedestrian travel: 739 people exited Gaza and 1,220 entered the Strip. During this time, Egypt also allowed thousands of tons of cement to enter the Strip, as it has on several occasions over the past year (39,000 tons since the end of Protective Edge). This time the entrance of the cement was particularly significant given that Israel has not allowed any cement to enter Gaza for the private sector for more than six weeks (since April 3rd). Israel’s ban on entrance of cement to the private sector was instituted, according to news reports, following the revelation that cement had been diverted in a breach of the Gaza Reconstruction Mechanism (GRM). Prior to the ban, Israel had reduced the entry of cement into Gaza for some months.

Cement destined for the private sector in Gaza, when allowed in, goes through the GRM, which was established following the 2014 hostilities at Israel’s request in cooperation with the Palestinian Authority and United Nations monitoring. The cumbersome mechanism is meant to enable Israel to monitor how construction materials are used. In the first three months of 2016, before the ban, 87% of the cement entering Gaza was designated for the private sector. The military admitted (Hebrew) last year already that the GRM had not managed to prevent materials from reaching the black market. The entry of cement via Egypt last week is not unprecedented either.

Gaza’s need for construction materials in general, and cement in particular, is immense. According to a recent UN report, nearly 90,000 of the people who lost their homes during Operation Protective Edge, are still considered displaced.

The prohibition on bringing in cement has practically halted almost all private building in the Gaza Strip. Osama Kahil, chairman of the Contractors’ Association in Gaza cited that of 320 construction contracting companies, just 70 are working at partial capacity on projects implemented by international organizations. Farid Zaqout, chairman of the Building Industry Association in Gaza, says that of 35 concrete factories in the Gaza Strip, only five remain operational and only at partial capacity. Of 180 factories that manufacture cinder blocks and are authorized to operate under the GRM, only 10 are currently operational, and of the five Gaza factories that produce concrete cylinders, only one is active. These factories provide livelihoods for about 4,000 people, most of whom are currently unemployed. Without the raw materials produced by these factories, tens of thousands of workers in related sectors, such as sewage infrastructure restoration, are unable to work as well.

The thousands of families who depend on cement for their livelihoods now await the results of apparent, ongoing discussions that we hope will inevitably lead to the cancellation of the ban. The question is, how long will it take and in the meantime, what price will be paid by residents of Gaza and of Israel? Given the needs and rights of Gaza residents and the fact that the GRM in any case is failing to meet its stated goals, Israel must renew the entry of cement immediately.