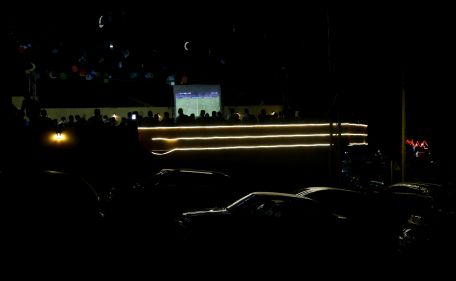 A generator-operated cafe screening a football game in Gaza City.

June 14, 2017. At the initiative of Gisha, a coalition of 16 civil society organizations sent an urgent letter yesterday to the attorney general, demanding that he advise the Cabinet to immediately rescind its decision to reduce the electricity supply sold and provided by Israel to the Gaza Strip.

In the letter to Attorney General Avichai Mandelblit, the organizations emphasize that the cabinet’s decision is unrelated to concrete security needs and is rather political in nature. The decision therefore violates international humanitarian law, according to which the rights of civilian population can only be harmed in the presence of an immediate military necessity (and even then, the damage caused must be proportionate). Reducing electricity supply to two million people, hospitals, sewage-treatment facilities, water pumps and other civilian infrastructure in the Strip does not serve any military necessity and certainly cannot be viewed as proportionate. Moreover, the decision threatens lives.

The director of Gisha’s legal department, Osnat Cohen-Lifshitz, said in an interview (Hebrew) to the Israeli army radio that “the state of Israel is not a neutral service provider to the Gaza Strip. The High Court ruled in 2008 that Israel is obligated to provide for the basic humanitarian needs of the civilian population in Gaza. Attempting to claim that the issue at hand is financial is a spin. The question is not a financial one; it’s a matter of humanitarian responsibilities that Israel committed to before the High Court, and is now trying to evade.” Cohen-Lifshitz also stated that the letter presents an unequivocal demand of the attorney general to advise the government not to implement the decision, which would be crossing a red line and will lead to a deterioration of the situation in Gaza with severe humanitarian consequences.