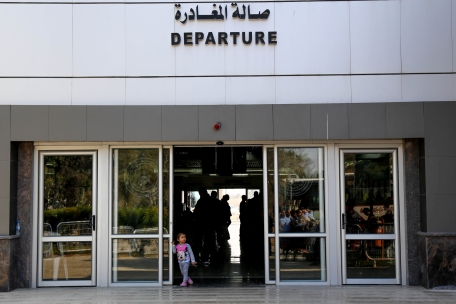 Rafah Crossing, opened yesterday for travel in both directions.

August 17, 2017. Rafah Crossing, between the Gaza Strip and Egypt, was opened yesterday for travel in both directions. About 30,000 people who meet Egypt’s criteria for exiting Gaza are currently on the waiting list for travel. The notice issued by the Palestinian Crossings Authority indicates that the crossing is expected to remain open for only two days. Earlier this week, the crossing was opened to allow Gaza residents on pilgrimage to Mecca to travel through Egypt to Saudi Arabia. Some 3,000 individuals were expected to cross through Rafah for this purpose.

Rafah Crossing had been closed for five months, the longest consecutive closure since 2007. From the beginning of the year and up until this week, travel from Gaza into Egypt was made possible only on 11 non-consecutive days. From the beginning of 2011 till mid-2013, when Rafah functioned normally, an average of approximately 40,000 exits and entries were recorded at the crossing each month. This figure emphasizes the necessity of the opening of the crossing, and points to the extent of the harm caused to residents of Gaza by keeping it closed. The fact that Rafah now remains regularly closed severely restricts the freedom of movement of Gaza residents, leaving Erez Crossing as the only option for travel into and out of the Strip.

Israel’s permit regime in conjunction with Egyptian policy at Rafah Crossing and the Palestinian Authority’s decision to pressure Gaza’s population by various means compound the hardship experienced by Gaza residents, who struggle with extremely difficult living conditions as is. Recently, the PA has reduced payment to Israel for Gaza’s electricity supply, cut the salaries of tens of thousands of PA employees in Gaza, and forced into early retirement thousands more.

The ongoing electricity crisis is another key aspect of these increasing adversities. Power supply was further reduced this week, after the sole power plant in the Strip scaled back operations on Saturday, due to a shortage in diesel. The plant is currently operating only one out of its four turbines, and supplying 24 megawatts instead of the 65 megawatts it has been producing of late. Supply lines from Israel carry a further 70 megawatts into Gaza, as has been the case since the Security Cabinet’s decision from June to approve the reduction of electricity supply sold and provided to the Strip. Lines from Egypt are still down, which leaves Gaza residents with a supply of 94 megawatts, allowing for only a few hours of power per day.