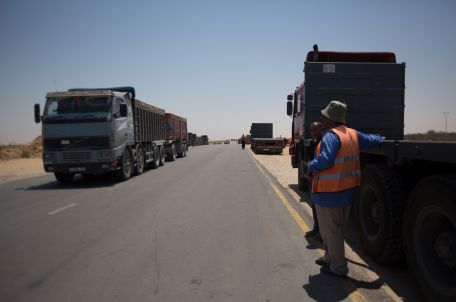 February 14, 2018. An urgent letter (Hebrew) was sent yesterday to the Prime Minister of Israel Benjamin Netanyahu, Defense Minister Avigdor Lieberman, and Transportation Minister Yisrael Katz, demanding that they take immediate action to advance the opening of a commercial crossing in the north of the Gaza Strip. The letter was sent by Gisha along with Israel Road Transport Board Director, Gabi Ben Harush, and the heads of three regional councils in Israel – Alon Shuster of Sha’ar Hanegev, Yair Farjun of Hof Ashkelon, and Gadi Yarkoni of Eshkol.

In late February, Israel is slated to impose new restrictions on the movement of trucks on roads in the western Negev leading to and from Gaza’s sole commercial crossing, Kerem Shalom, situated in the south of Gaza. The Transportation Ministry’s decision to restrict the movement of trucks began two years ago and was motivated by allegations that the truck traffic poses a safety hazard to residents of the Negev.

Over the last two years, the Israel Road Transport Board (representing leading transport companies and carriers) filed a petition against the implementation of the restrictions on traffic and Gisha filed an objection, expressing strong opposition on behalf of Gaza residents. In addition, the former Ministry of Defense Director General Maj. Gen. Dan Harel wrote to the Transportation Ministry, stating (Hebrew) that “restricting movement on the roads to and from the [Kerem Shalom] crossing has far-reaching implications for the civilian and humanitarian needs that Israel is obligated to supply to the Gaza Strip.”

The letter to the ministers stated that the most rational and economical solution to the safety hazards posed by traffic on Israel’s southern roads is to execute the Defense Ministry’s existing plan to open a commercial crossing in the north of the Strip. Implementation of the plan would immediately abate traffic on the roads leading to Kerem Shalom Crossing, located at the southern tip of the Gaza-Israel border fence. A commercial crossing in Gaza’s north would also significantly reduce the cost of transporting goods to and from the Strip. In this sense, opening a commercial crossing in the north of Gaza would not only strengthen numerous Israeli businesses that have trade relations with Gaza, but would also support economic development in the Strip, in keeping with Israel’s self-professed security interests.

To read the letter in full, click here (Hebrew).