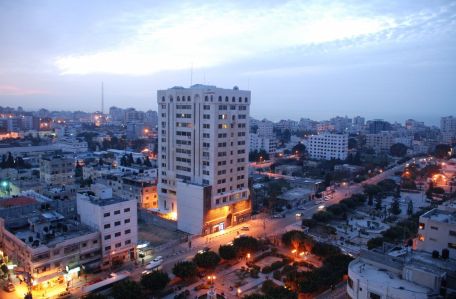 A view of Gaza. Photo by Karl Schembri.

December 25, 2018. Gaza’s Christian community is comprised of approximately 1,100 people. Each year at Christmas and Easter, the Coordinator of Government Activities in the Territories (COGAT) publishes arbitrary quotas for “holiday permits” to be granted by Israel to Christians in the West Bank and Gaza, purportedly to allow Christian families to mark the occasion together and visit holy sites in Bethlehem, Nazareth, Jerusalem and elsewhere. Israel regularly frames the holiday permits for Christians as “special measures” and “gestures of goodwill.” In practice, holiday and prayer permits are often used as yet another means of exerting pressure on Palestinians living under Israel’s control.

At the end of November, COGAT announced quotas for travel permits for the holiday season. It emphasized that permits would not be issued to Gaza residents whose family members had “overstayed” their permits and who are, from Israel’s perspective, “illegally present” in the West Bank or Israel. In other words, if your family member overstayed a permit, you will be punished for this and will not be given a permit yourself.

To date, Gisha understands that 590 holiday permits have been issued for travel from Gaza to east Jerusalem and the West Bank. It is possible that additional permits will be issued in the coming days. At least 104 people have been placed under “security blocks” by Israel, denying them all travel via Erez Crossing. It seems that many of these individuals, ostensibly deprived of permits for security reasons, are actually being denied the fundamental right to freedom of movement solely because their family members are in Israel or the West Bank “illegally.”

Gisha is representing a number of individuals who have been blocked from receiving holiday permits for no other reason other than being related to individuals who allegedly left Gaza and did not return on time.

In the distribution of permits, it is often the case that some members of a family receive permits while others are denied. The tactic, which splits families apart for the holiday, is designed to prevent people from staying in Israel or West Bank or compel them to forgo the chance of reuniting with extended family and accessing holy sites.

We maintain that Israel is obligated under International human rights law to respect Palestinians fundamental rights to freedom of movement and religious freedom. Withholding permits from Gaza residents due to the actions of their family members and precluding Christian families from celebrating Christmas in the company of their loved ones constitutes collective punishment. It cannot be justified by security reasons and should not be presented as such.

We wish a Merry Christmas and happy holidays to all those who are celebrating.