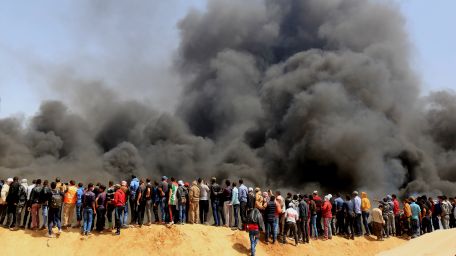 Protestors in Gaza. Photo by: Gisha

Tuesday, May 15, 2018. Since March 30, Israel has been responding with lethal force to protests taking place on the Palestinian side of the fence separating the Gaza Strip from Israel. The result: Over 100 dead, over 10,000 wounded, including women and children, all Palestinian. We call on Israel to immediately refrain from the use of lethal force against unarmed civilians.

The Israeli government has described the events as an assault on Israel’s sovereignty, while failing to address the reality that has led to the mass protest – 50 years of occupation and over 10 years of closure. Daily life for Palestinians living in the Gaza Strip is unbearable: Basic infrastructure is in ruins, the economy is stunted, unemployment has reached an all-time high, and health services are in danger of collapse. For years, residents of Gaza have lived on the verge of a humanitarian crisis.

Children in Gaza, who make up the majority of the population, are still struggling with the trauma of previous rounds of violence and war, terrified of another attack and more death and destruction. Time and again reality demonstrates that there is no military solution to the conflict between Israel and Gaza. Instead, Israel must stop the shooting and killing and immediately lift the closure, thereby safeguarding the lives and human rights of the people of Gaza and the region as a whole.