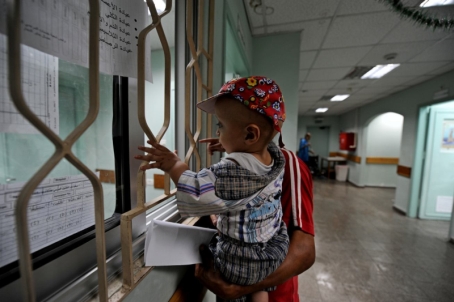 According to the most recent data by the Palestinian Central Bureau of Statistics, 43.2% of Gaza residents are children under the age of 14. Photo illustration: Karl Schembri

December 31, 2014. Rafah Crossing into Egypt has been mostly closed over the past months, trapping many individuals from Gaza needing to travel abroad. A month ago, the Palestinian Civil Affairs Committee submitted permit requests to Israeli officials on behalf of approximately 300 students in order to coordinate their exit via Erez Crossing to Allenby Crossing and into Jordan. Once there, they would make their way to the countries in which they had been accepted for study. The committee passed on the names of the students to the Coordinator for Government Activities in the Territories (COGAT). Time passed, the school year continued. In the meantime, some of the students succeeded in exiting via Rafah Crossing during the three days it opened in December.

Two days ago, Israel announced that it would allow only 140 of the students to leave via Erez Crossing en route to their studies abroad. Yesterday, 37 students managed to exit. Of those that are left, some haven’t yet been tracked down by the Civil Affairs Committee and others have had their visas expire in the meantime and so can’t take advantage of the opportunity. More students are expected to travel in the coming period.

On Sunday of this week, Hamas officials prevented 37 orphaned children, aged five to 12, and five adult chaperones from exiting the Strip to Israel, claiming that the trip involved improper normalization of ties with Israel. The children, whose parents were killed during Operation Protective Edge were supposed to visit the Safari Park in Ramat Gan and towns in the south of Israel, and to meet with Palestinian Authority President Mahmoud Abbas in Ramallah.

The exit of the orphans and their chaperones was organized by Yoel Marshak of the Israeli Kibbutz Movement and was approved, as an exception to the rule, by COGAT.

According to the most recent data released by the Palestinian Central Bureau of Statistics, 43.2% of Gaza residents are children under the age of 14, which is slightly more than 750,000 children. Around 1,500 of them are newly orphaned since the fighting last summer. Hamas’s decision prevented 37 of them from receiving a rare opportunity to leave the Gaza Strip, since Israel allows Palestinians to exit only if they meet a strict set of criteria. Most Palestinians who receive approval to exit are medical patients and those accompanying them, merchants and a handful of “exceptional humanitarian cases”. Given this, it’s unfortunate that Hamas officials also obstruct travel for political reasons.